Alpha Finance Lab is launching Provably Rare Gems, in short GEMs, in collaboration with swit.eth, the original thinker and builder of GEMs.

Over the weekend, swit.eth proposed Provably Rare Gems on the Alpha Forum, which we found the idea to be very groundbreaking. The idea really challenges you to rethink about the nature of assets on-chain and the extended use case of blockchain technology in the NFTs and the metaverse. For the last couple of days, we had been working with swit.eth to fine-tune this idea and prepare to launch this product together as an experiment and a pathway for Alpha Finance Lab to enter the metaverse.

At launch, we introduce Loot GEMs and Bloot GEMs. See the relevant section below for how Loot and Bloot communities can claim these GEMs without having to mine.

Before we go into Provably Rare Gems, let us dive into what our views are in relation to the gaming industry and how we see the next progression of the metaverse evolving into.

Rethinking the gaming industry & the next progression of the metaverse

We see the metaverse evolving in a similar progression that MMORPGs had evolved in the traditional gaming industry, but in a decentralized and transparent way.

Typically in MMORPG, there are fundamental items such as weapons, armors, boots, accessories, etc. that can be equipped to enhance the character’s stats to fight monsters in PvE or other players in PvP. For hardcore adventurers, gem is a necessary component to significantly boost your gears and enhance their abilities, making these items much more unique and powerful. These gems introduce a concept of rarity to MMORPG. The more rare the gems, the more powerful the boost effects.

In the traditional gaming industry, the concept of “rare” loot can be as simple as implementing a fixed percentage chance for drops. However, to make an item “rare” on-chain is not as trivial, and this is one groundbreaking feature of GEMs: provable rarity.

Provably Rare Gems are ERC-1155 tokens for gemstones for use in the metaverse. Applying a Proof-of-Work (PoW) concept, GEMs are mined with off chain proof-of-work, ensuring provable rarity and fair distribution while also allowing more GEMs to be discovered indefinitely as global demand grows (though it becomes exponentially harder over time to discover new GEMs).

Anyone can mine these GEMs (see the section below for how to mine these GEMs). Once the mining starts, mining a GEM requires the miner to find a salt that together with the GEM type hashes to a small number, similar to how Bitcoin and Ethereum’s Proof-of-Work operates. The smaller the output number, the higher the chance of success.

Precisely, each GEM maintains its own difficulty, which reflects the expected number of hashes from random salt required to compute in order to satisfy the PoW requirement. The higher the difficulty, the longer it may take to find a solution. Each time a GEM is mined, the GEM’s difficulty will increase exponentially, making the next mining more difficult.

In summary, you can think of Provably Rare Gems as a smart contract that implements the PoW requirements on the contract itself, in which this contract is deployed on Ethereum blockchain.

Why is this important?

What can these GEMs be used for?

There are 10 GEM types for Loot GEMs. Below is the list of Loot GEMs and details on each gem’s rarity in the order of least rare to most rare.

There are 10 GEM types for Bloot GEMs. Below is the list of Bloot GEMs and details on each gem’s rarity in the order of least rare to most rare.

What can these GEMs be used for? In summary, these GEMs can be picked up by any game developer to be used in the metaverse.

What we are seeing here is the opposite. Loot and Bloot have created fundamental items used in games, distributed these NFTs to the community, and bootstrapped the community. Now that the community is together, the collective power can collaborate and bring value to Loot or Bloot that they own. When developing a game, the game developers would be better off incorporating Loot and Bloot in their game to onboard these Loot and Bloot holders to be early game players.

What we hope to see with GEMs will be similar, but in a more flexible way. Once game developers pick up Loot / Bloot and the GEMs to be used in their game, Loot GEMs and Bloot GEMs will have a strong use case. Additionally, since new GEMs can be created by anyone in a permissionless way by specifying the GEM's parameters, this allows for more types and use cases of GEMs. Let’s say if a new NFT project creates another set of fundamental items, similar to Loot, anyone can then create a new set of GEMs for that NFT collection on Provably Rare Gems. Provable Rare Gems will be the platform to distribute and mine GEMs for all communities and all upcoming games.

For Loot & Bloot Holders: How to claim GEMs

Provably Rare Gems will randomize and distribute 4 gem types to any Loot and Bloot holder - no PoW is needed for Loot or Bloot holder. All operations that involve randomness will use future block hash as seed. The system will use the block hash at the start time for RNG seed. Thus, nobody can pre-mine the GEMs nor speculate which Loot IDs will get rare gems.

Depending on luck, some Loot and Bloot holders will get to claim the rarest gemstones. To claim the GEMs, follow the steps below.

Once claimed, the GEMs will show up at the top as GEMs you own (see image below).

How to mine Loot & Bloot GEMs?

To make it fair for everyone, mining will start at 4:30PM UTC. Anyone who wants to get a hold of these gems can mine. Each gem has a different difficulty level to mine. For instance, Amethyst gem type is less rare than Pink Diamond, since miners can get 64 Amethyst/mine and 1 Pink Diamond/mine. Once a gem in a particular gem type is mined, the next gem in that gem type will be much harder to mine and requires more computational power than the previous one. Difficulty level 65 means that on average a miner needs to try 65 times before getting the right answer.

That’s it! Once mined, the GEMs will show up at the top as GEMs you own.

For more details on the proof-of-work behind Provably Rare Gems, see the relevant section above.

How is this important to the growing Alpha ecosystem?

Provable Rare Gems is an experiment launched by Alpha Finance Lab and swit.eth to rethink the gaming industry and push for the next progression of the metaverse.

At the high level, this suggests that Alpha Finance Lab is officially venturing into the NFT and metaverse universe. We will continue to grow and innovate the Alpha DeFi ecosystem while expanding and experimenting in the up and coming industry segments, namely NFTs and the metaverse.

Additionally, for every 9 original Loot GEMs and Bloot GEMs mined, an extra one will be sent to Alpha DAO to promote ecosystem development. Alpha can allocate the allocation back to builders, stakers, or swit.eth (original thinker and builder) as agreed. Note that for any other new GEMs, the GEM's creator reserves the full right to set the allocation for that GEM.

Though Alpha Finance Lab started out as a DeFi lab when the main use case of blockchain technology revolved around financial applications, the blockchain industry is evolving fast with the expanding use cases and community to NFTs and the metaverse, disrupting the entertainment industry. We will not limit ourselves to only innovating in the DeFi space, but will move together with the broader blockchain industry to build, innovate, and disrupt other industry segments that blockchain technology touches upon.

If you have other ideas, be sure to propose on the Alpha Forum, so we can build something together! 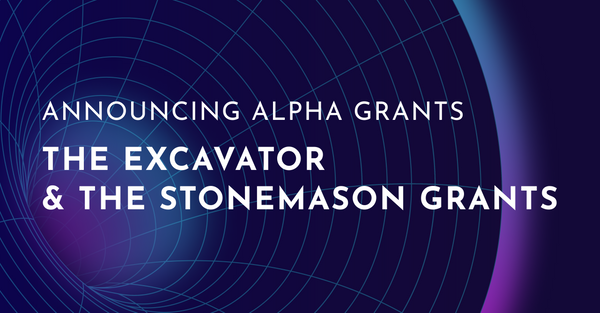 After an overwhelming response to the launch of Provably Rare Gems (GEMs), we are giving out The Excavator Grant and The Stonemason Grant for Alpha Wolves who are interested in

Introducing the Alpha Buy Wall, a smart contract that allows any users to bid for any NFT of a particular collection, essentially providing a price floor for that NFT collection.