“Look at our universe, it’s getting bigger and bigger!”

One word that can sum up our first half of September is ‘exciting’. Curious what we’ve been cooking for you? Let’s take a look!

The summary will be broken down into the following sections:

During the first half of September, the team at Alpha Finance Lab paid enormous attention to the Alpha DeFi Ecosystem, in particular, the expansion of Alpha Homora V2 to other chains and the launch of AlphaX - the new, better, and more capital efficient way to hold and trade crypto assets.

We invested our time in preparing Alpha Homora V2 to launch on other chains and layer-2 solutions in the most efficient and least resource-intensive way possible. We’re excited to share that Alpha Homora V2 will be launched on Avalanche Chain next!

AlphaX also got its final touches as well. The team had just completed the frontend development with full functionality. This means AlphaX launch date is on the very near-term horizon, hence the Alpha Wolves community will be able to experience the new, better, and more capital efficient way to hold and trade crypto assets.

Blockchain technology is expanding rapidly, growing beyond DeFi and into the realms of the metaverse. As a blockchain lab, Alpha sees huge untapped potential and growth in the metaverse and its communities, hence we quickly expanded to capture the market gap in new segments on blockchain. In early September, we expanded our development team as a new team dedicated to building the Alpha Metaverse ecosystem, launching 3 products within the time period.

Alpha Buy Wall (ABW) is a marketplace for NFT enthusiasts to either bid for the floor price of a certain NFT collection, or get instant liquidity on their NFT asset by selling to bidders on the ABW.

Don’t see your favorite NFT on here? We’re taking a poll, so cast your vote here, or you can make a new suggestion on the Alpha Forum here.

Along with the ABW, Alpha Finance Lab also experimented with the NFT usability by creating the Provably Rare Gems together with Swit.eth to establish assets that can ‘literally’ be proven for their scarcity. This allows PRG to enter the gaming area, such that by acting as “boosting power” for games’ fundamental items. The team forecast that PRG gems can be initially used with Loot and Bloot NFTs so that they can boost these items when compatible games are created in the community space.

Besides giving NFT assets liquidity and providing them with usability, the Alpha Team also created a marketplace for NFT assets that still haven't been traded anywhere in the blockchain landscape. Andre, the creator of Yearn Finance, launched his own RPG game, the #RarityManifested. This game is similar to an ordinary role-playing game but on the blockchain. It consists of users obtaining ‘summoners’ and leveling these characters to adventure or play around in the rarity world. Surprisingly, with all its traction, there was no marketplace to trade these summoners among the users. Unquestionably, this was also detected by the Alpha Team, thus they began creating this marketplace and deployed it on the Fantom Chain.

There are more than 210 million $ALPHA staked on the Alpha Tokenomics site, which represents around 52% of ALPHA in the circulating supply! To further emphasize the power of the Alpha Wolves community, since the beginning of September, the TVL has increased by more than 21 Million!

The Alpha DAO gained its traction from our community that prompted various conversations and on-going threads on the Alpha Forum. Therefore, to welcome the community to Alpha DAO triumphantly, we also hosted various informative sessions for the Alpha Wolves. This includes:

16 September 2021: Discussing the Expanding Alpha Ecosystem Beyond DeFi and Entering the Realm of Metaverse

Listen to the podcast here.

Apart from these sessions, we also offer the Alpha Wolves two special grants: The Excavator Grants and The Stonemason Grants. These grants work directly towards the Provable Rare Gems in the sense of creating mining software and finding usability for these gems.

As mentioned earlier, everyone here is excited for what is to come at Alpha Finance Lab. As a blockchain lab, we will continue to focus on researching/identifying market gaps/trends and building cutting edge products with strong product-market fit on blockchain.

That’s it for this newsletter, feel free to follow us on Twitter and join our Telegram / Discord for more updates and information!

Until next time Alpha Wolves!🐺

The team has officially launched the uncapped pSTAKE Finance [https://twitter.com/pStakeFinance] on the mainnet with full functionality for ATOM holders. pSTAKE is our second incubated Alpha Launchpad project 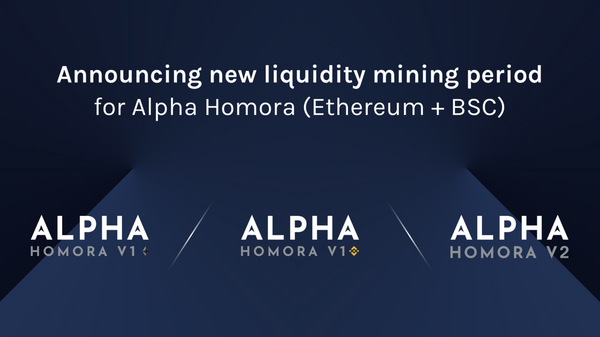