The team has officially launched the uncapped pSTAKE Finance on the mainnet with full functionality for ATOM holders. pSTAKE is our second incubated Alpha Launchpad project that aims to offset the solidity of users’ staked assets. By staking on pSTAKE Finance, users can gain liquidity to their staked assets and therefore use them on other utility platforms, such as yield farming and lending to earn yields on top of the staking reward from pSTAKE protocol.

What does this mean for ATOM holders and ALPHA stakers?

pSTAKE Finance launched their capped version on mainnet 2 months ago. Since the team behind this project was the creator of Persistence, they surely have security as their top priority. Hence, this capped launch was aimed not only to educate users on the mechanism of the protocol, but also to ensure security. Therefore, early adopters on the capped launch have been receiving additional rewards for being beta users as well as liquid staking on Cosmos Network. In total, more than 200 users actively participated in pSTAKE’s capped launch, resulting in $4.5M in TVL and meeting all cap limits. Today, pSTAKE Finance is launching their uncapped version allowing ATOM holders to stake openly without a cap on the staking amount! See here for a guide to use pSTAKE.

Today’s event will be an enormous milestone for pSTAKE team before they finally launch the PSTAKE tokens. With their success, the Alpha Wolves community will share this glory along with them too in the form of staking reward on Alpha Tokenomics. This means, in the near future, users who stake ALPHA on the Alpha Tokenomics will not only receive ALPHA and BETA tokens as their reward, but will also receive PSTAKE tokens, combining up to 3 tokens in total as staking reward (PSTAKE will begin allocating to users when the token officially launches)!

The Alpha team will continue to research new technologies, identify market gaps, and build innovative Alpha products with strong product-market fit. We’ll continue to leverage this know-how to identify top quality projects, whether they are in DeFi, NFT, Metaverse, or other areas on blockchain, and give guidance and advice through Alpha Launchpad incubator program. As a result, with ALPHA token, stakers get exposure to cutting-edge technologies both Alpha Finance Lab and Alpha Launchpad projects are building. 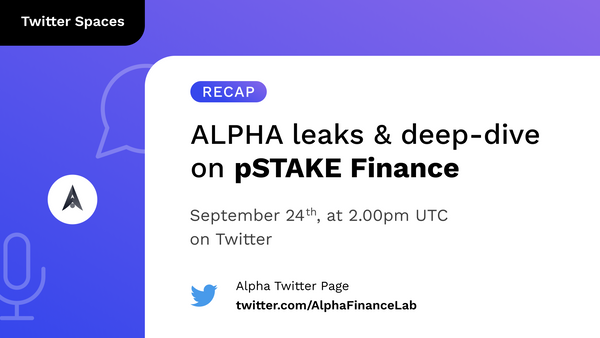 The September 24th Twitter Spaces session was a great opportunity for Alpha Team to shed light on alpha leaks, clarify any concerns in the community,  as well as act as 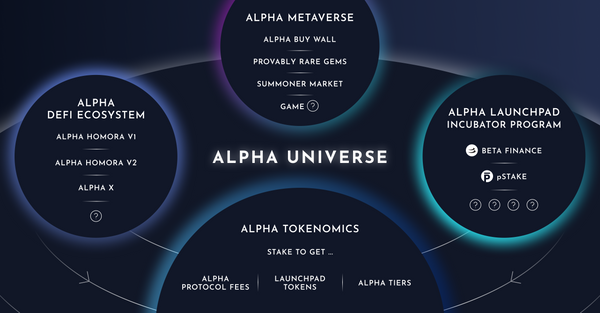 “Look at our universe, it’s getting bigger and bigger!” One word that can sum up our first half of September is ‘exciting’. Curious what we’ve been cooking for