Hey Alpha Wolves, we’re back with the second edition of our bi-weekly newsletter! For those who missed the first edition, this newsletter is a new section on the blog where we cover all things Alpha every other week.

Let's dive into the recaps for this edition.

The community managed to get the total number of ALPHA staked up by 8% alone last week, putting it at ~125M ALPHA.

AlphaX has completed its first security audit with consensys with no major issues, and we are now focusing on the first edition of the UX/UI.

Our friends at EPNS hosted us with an AMA on their Telegram channel. The AMA had such an amazing response that they even had to mute the channel to limit the number of questions asked!

Kyros Ventures hosted Tascha on their Twitter Space to talk all things Alpha!

Beta gave users a brief overview of what the protocol can be used for and some ways it can benefit users/hodlers.

Stakers of more than 1,000 ALPHA can now unlock an additional 10% to 40% leverage when opening a farming position, depending on which Alpha Tier they are in. An example of this can be taken from the Curve 3pool, where the maximum leverage offered to the average user is 7.0x. Being an Alpha Wolf Pup, users unlock 10% more leverage, increasing the limit to 7.7x leverage. This ranges to 40% more leverage as an Alpha Pack Leader, where the limit is increased to 9.8x leverage.

The integration reinforces the positive feedback loop created within the Alpha Universe and amplifies the already synergistic nature of all Alpha products.

We wanted to guide users on how they can earn high yields in any market conditions by leverage yield farming on the Curve 3pool. The leverage Curve 3pool on Alpha Homora V2 offers high returns with minimal risk since the underlying assets are 3 different stable coins. Therefore, regardless of market conditions farmers can still receive high APYs with managed risks.

Users can also take advantage of the current features that are already built, such as the ‘Basic Farming mode’ and liquidation notifications by EPNS (Ethereum Push Notifications Service) to better manage their risks whilst leverage yield farming.

The announcement also goes into detail about how liquidations are calculated on Alpha Homora V2,which are based on the concept of collateral credit and borrowing credit, as well as detailed examples on the specific risks and scenarios where users may get liquidated on the Curve 3pool.

Alpha Launchpad and Beta Finance project release were the catalysts that increased the number of ALPHA staked to over 120M ALPHA.

The image below shows the amount of ALPHA staked along with the dates Alpha Launchpad and Beta Finance had been released.

With the number of ALPHA staked shown in the chart above, it is evident that ALPHA stakers have been anticipating the upcoming product and token launch of Beta Finance.

The large number also shows that the community believes in what we have built and will continue to build at Alpha such that ALPHA holders decide to stake their tokens as a security model for all Alpha products.

That’s all we have for this edition of the newsletter, feel free to follow us on Twitter and join our Telegram / Discord for more updates and information!

See you next time Alpha Wolves!🐺 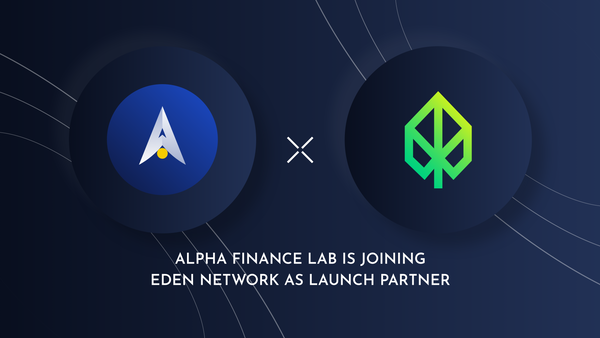 The wait is over for the Alpha Wolf Pack! Alpha Tiers are now integrated with Alpha Homora V2! This key integration adds to a number of strong benefits that ALPHA