Greetings Alpha Wolves, let's dive into the recaps for the first half of August!

At the time of writing, the number of ALPHA staked is at ~184M (~45% of the circulating supply)! Comparing this number with our previous newsletter, it's ~60M increase in ALPHA staked in just two weeks!

The second security audit for AlphaX has begun with Trail Of Bits, and we are also about to begin frontend development.

Allen, the founder of Beta Finance, discussed all things Beta on The Delphi Podcast. Check it out here.

Alpha Finance Lab has partnered with Eden Network to leverage its priority queue. Together with Band Protocol, we will be one of the main launch partners of Eden Network.

Eden Network is a new priority transaction network for Ethereum which aims to serve its users by protecting them from front-running and creating incentives for block producers after EIP-1559 has been implemented.

With this partnership, Alpha Finance intends to explore more opportunities using the Eden Network’s priority network. One of the many possibilities is a liquidation bot for the Alpha Homora product line, which will help to increase the security of the protocol as well as multiply value accrual to ALPHA stakers, by redistribution of assets in the future.

Alpha Launchpad - Gearing up for BETA Distribution to Alpha Stakers

With Beta Finance and three other new projects now on boarded onto Alpha Launchpad, we wanted to prepare users and inform them on how they can receive BETA and any future Alpha Launchpad project tokens.

On 18th August, 2PM UTC, the unstaking period for ALPHA stakers will be adjusted from 7 days to 30 days on Aug 18th, 2pm UTC. Additionally, the withdrawal period (period in which users can claim unstaked amount) will be extended from 24 hours to 72 hours.

We ensure all projects we incubate bring real and long-term value to DeFi. By distributing many Alpha Launchpad tokens and adjusting the unstaking period to 30 days, ALPHA stakers will benefit from the significant growth at Alpha and all the incubated projects long-term. Since Alpha Tokenomics is uniquely different in a way that it is the only place that allows you to receive tokens of high quality projects very early on, the ALPHA unstaking period should not be compared to that of the other projects.

More information about BETA token distribution to ALPHA stakers in the next announcement below.

On August 18th, 2PM UTC, the BETA lock-up period will begin, and anyone staking/stakes from that point on will get BETA.

*Note: Stakers will not need to stake for 6 months to get tokens, but they will only get tokens based on the time that they stake.*

There are 2 main factors that impact how many BETA tokens you will get upon staking ALPHA are:

For those who want to receive BETA tokens but have yet to stake ALPHA, you can simply stake here!

In addition to the BETA lock-up period for ALPHA stakers starting on August 18th, Beta Finance will also be launching Phase 1 of their product on Ethereum on the same day!

Beta Finance will be having a 2-phased launch on Ethereum, with most of its key functionalities already available in Phase 1.

Phase 1 will allow lenders/borrowers/short sellers to carry out those functions on Beta Verified Markets, which are markets that Beta Finance has evaluated and deemed safe for users to interact with. These users will be rewarded with significant BETA rewards (distributed retroactively when the token is launched), just by interacting with these verified markets.

Phase 2 will allow users to carry out the same functions above, but in a permissionless way and in any money market.

With the goal of decentralizing and scaling Alpha Finance Lab, we will launch phase 1 of Alpha DAO to involve the community in a larger way regarding anything Alpha.The DAO will be launched in multiple phases to ensure a smooth transition, with phase 1 launching in August 2021.

Grant proposals submitted in phase 1 will only be voted by a group of temporary designators, which are a selected few core Alpha team as well as community members. In future phases, these designators will be replaced by Alpha DAO delegates that are voted by ALPHA stakers.

In phase 1, we will be focusing on transparency and engagement with the community on product developments/releases, partnerships, ideas and more. Alpha DAO phase 1 will include:

These spaces will allow us to engage with the community, partners and developers to discuss ideas and opportunities. Active Alpha Wolves in the community can also look out for invitations to join the Alpha Podcast!

That’s it for this newsletter, feel free to follow us on Twitter and join our Telegram / Discord for more updates and information!

Until next time Alpha Wolves!🐺 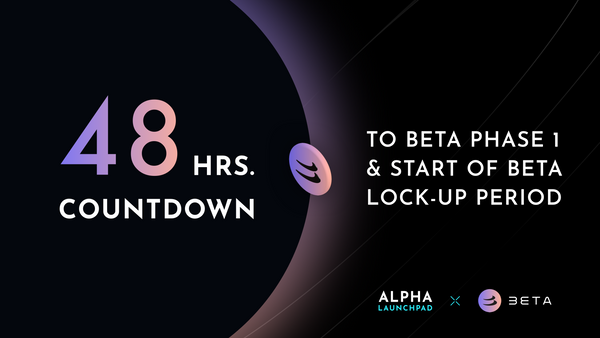 In less than 2 days (Aug 18th, 2pm UTC), Beta Finance’s Phase-1 will be launched as well as the start of the BETA lock-up period for ALPHA stakers will

Announcing Alpha DAO and more details behind the upcoming Alpha DAO phase 1 launch this August 2021! Alpha community is one of the most important aspects of Alpha Finance Lab.